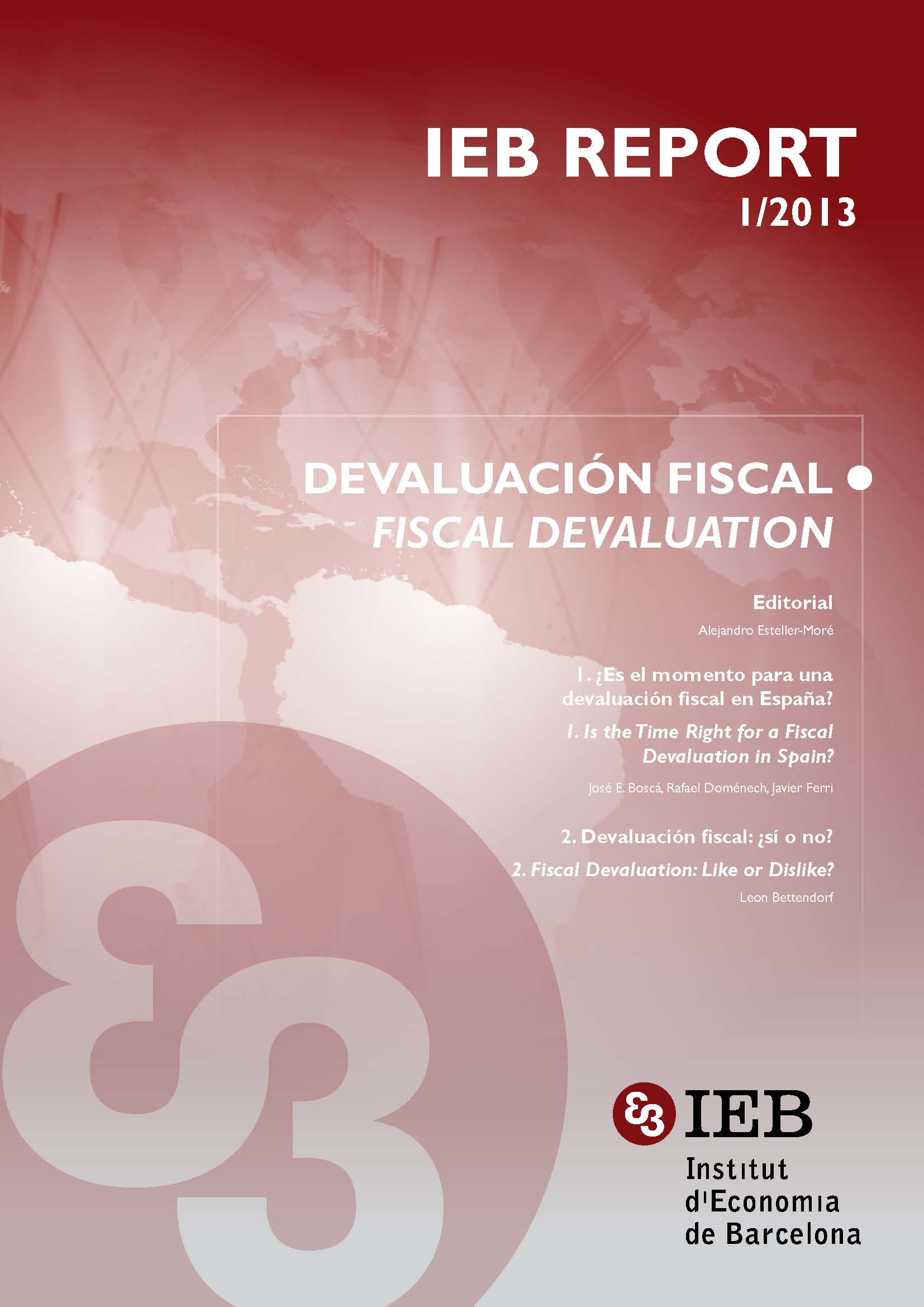 The positive effects on short-term economic growth of a fiscal devaluation mean that various analysts and institutions recommend adopting this policy to help reactivate an economy. Indeed, the International Monetary Fund (IMF) has recently recommended that the Spanish government do just that, i.e., increase VAT and reduce employers’ social security contributions. In its IEB Report 1/2013, the Barcelona Economics Institute publishes an analysis of the implications of a fiscal devaluation in Spain. The study is the work of three professors at the University of Valencia, José E. Boscá, Javier Ferri and Rafael Doménech (who is also chief economist at BBVA Research) and, Leon Bettendorf, a researcher from the CPB Netherlands Bureau for Economic Policy Analysis. Based on the empirical analysis undertaken in this report, Boscá, Ferri and Doménech conclude that a fiscal devaluation would allow the Spanish economy to grow each year by an average of 0.74% while employment would rise by 1.3%.
The editorial to the IEB Report 1/2013 is provided by Alejandro Esteller-Moré professor at the University of Barcelona and an IEB researcher, who claims that in addition to these positive effects on the economy, “increasing VAT is also a suitable way for making the tax system more efficient, a measure that is independent of the particular point at which we might be in the economic cycle”.
Empirical analysis
Boscá, Ferri and Doménech’s study specifically examines the effects of a 3.5% reduction in the firms’ effective social security contributions and a 2% increase in the effective rate of VAT. The researchers claim that these two changes in the respective rates are in line with the latest recommendations form the European Commission and the IMF.
Meanwhile, Bettendorf draws on his empirical results to conclude that the positive effects of devaluation are only modest and, moreover are dependent on each economy and on the tax-benefit system in operation. The researcher from the Netherlands Bureau for Economic Policy Analysis focuses on the potentially regressive impact of this measure.
According to Alejandro Esteller-Moré, when introducing the fiscal devaluation “the standard tax rate does not necessarily have to be increased, but exemptions can be eliminated, as can reduced rates (achieving the so-called ‘C-efficiency’ ratio)”. He goes on to say that the conclusion of the IEB Tax Forum in the context of a proposed tax reform for Spain is precisely “to increase the weight of VAT by eliminating exemptions, special regimes and, as far as possible, bring the reduced rates into line with the standard rate”.
Confirmation of the theoretical arguments
The results obtained by Boscá, Ferri and Doménech confirm the main theoretical arguments in support of fiscal devaluation, and the authors conclude that “a fiscal devaluation in Spain under the terms studied here would depreciate the real exchange rate and improve the current account balance”. Likewise, they point out that real wages would increase, as a result of the reduction in social security contributions, “while the increase in VAT would stimulate worker demand for higher wages”.
They also stress that, although the measure is revenue neutral ex ante, “once the effects of the general equilibrium are taken into consideration, tax revenues rise by 0.25% after two years”. However, as Leon Bettendorf also points out, the VAT increase may have undesirable redistributive effects, which might be alleviated using transfers to the most disadvantaged groups to satisfy various social ends, taking advantage of the increased revenue generated by the measure.
The work of Leon Bettendorf highlights two key points: currency devaluation improves competitiveness but it is not a permanent solution, and tax increases have an impact on efficiency but they cannot become a habitual measure. The Dutch researcher claims that the effectiveness of fiscal devaluation “depends on the degree of indexation of social transfers”.
Download IEB Report 1/2013